After nearly a year of being quiet about West Cheshire College tagging their students with RFID, a final update to round the story off as there have been some happenings behind the scenes.  The monetary spend of £1,050,242 on ultra wideband RFID that ‘failed’ in it’s job to monitor the students, despite it being used by the military, is the language that speaks to UK parliament.  The civil liberties lost and invasion of privacy the 14-19 year old, blissfully unaware, students suffered were ignored by the establishment.

After learning, from Freedom of Information requests, that the college had spent over a million pounds on untested, uncosted, undocumented, unstandardised RFID I contacted the Public Accounts Committee to report the cost.  They passed the enquiry onto the National Audit Office who carried out an investigation into the unusual accounting of this spend.  On the 10th November 2014 I received a letter from Margaret Hodge MP who oversees the Public Accounts committee:

“Inquiries made by the National Audit Office of the Skills Funding Agency suggest that the Agency have no knowledge of student tracking systems in operation at further education colleges.  I understand from your previous communication that you have already received confirmation from the Department of Business Innovation and Skill and the Department of Education that they do not hold specific information on the tracking system in question and they they are not running and programmes to introduce such systems more widely in schools an colleges.

The National Audit Officer have highlighted to me previous weaknesses in the arrangements to access and manage capitol funding bids from further education colleges.  At about the same time that West Cheshire College would have made its bid for new buildings broader concerns began to emerge about the then Learning Skills Council’s (LSC) overall management of the capitol programme.  These concerns were brought to light in critical reports by Sir Andrew Foster and the Education Select Committee.

The LSC was disbanded in 2010 and it’s responsibilities, including management of further education capitol investment programme, were assumed by the Skills Funding Agency (SFA).  A Cabinet Office review of the SFA’s investment programme in 2013 reported that the criteria for distributing grants had been developed in a way which promoted value for money.

In the absence of any further evidence of a wider problem the National Audit Office is not planning to undertake any further inquiries at this time.“

So a botched spend on flawed technology, mismanaged by the college and the government?  Or the RFID industry using UK students at West Cheshire College, wearing RFID supplied and pioneered by Zebra Technologies, for the IEEE 802.15 4f standard approved February 2012, which Tim Harrington, the Vice President of Zebra Technologies, sat on the IEEE 802.15.4f working group on?

Whatever it is or is not the sorry episode is done, with students and parents non the wiser it ever happened.  This practice of tagging students with RFID is common in the USA, let us hope the UK does not follow suit.

Missouri bans tracking RFID in schools.  In the first of its kind legislation, Missouri Senator Ed Emery‘s bill was passed last week.  Ksn.com reports that “The bill will take effect in October after lawmakers overrode Gov. Jay Nixon’s veto of the bill this past week, just barely getting the required two-thirds majority in both chambers.” 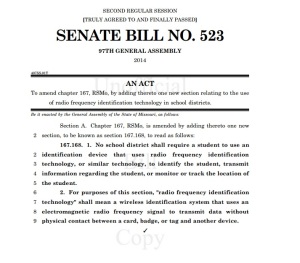 Many schools in the USA track their students using active RFID which is a chip powered by a small battery and emits a regular pulsed radio frequency signal.  Readers then pinpoint the location of chip, thereby identifying the child’s whereabouts.  Wearing such a device is huge invasion of privacy of the children potentially being able to be seen in sensitive areas such as washrooms, school nurse, etc.

The technology is not without controversy.  One student, Andrea Hernandez in San Antonio, refused to wear the chip on religious grounds and was excluded from her high school as a result.  The somewhat extreme action by the school gained international exposure and support from privacy groups.  After a year of running the RFID locator programme the scheme was scrapped.

The excellent ‘Position Paper on the Use of RFID in Schools‘ sets out the concerns with using this technology with children and heartening to see that Missouri have taken this on board and banned tracking RFID in schools.

The RFID Journal reports that a company in California, Iotera, is developing a 900MHz RFID tag that has a 4 mile range and that “a school district will use it to track students arriving on campus or traveling to and from school“.  Rather than just being able to track students on campus this new geographical tracking takes tagging children one step further.

Iotera have visions of smart cities with the Internet of Things (IoT) long-range “sensors to increase safety and efficiency” – in this company’s eyes this involves tagging humans.

The figures on how dangerous it is for children attending school are unknown but it seems that participating in the activity of schooling is relatively safe otherwise why would governments insist children attend school and parents willingly send them?  There is inherent risk in all activities humans do and carrying RFID chips, emitting frequencies that have unquantifiable health effects and “smart”ing cities up, bathing us all in electrosmog does not sound any safer than the situation we have now – where children are free of RFID tags.

With the possible risk to health of carrying emitting RFID and the added risk of other people tracking RFID tags that children carry, by hacking into their RFID emitting signal, the “increase safety” that Iotera claim is disputable.

But yet again we see the next generation via school being conditioned to use technology and be advised it is for their safety/convenience and learn that it is perfecting acceptable for others to track their whereabouts.  Apart from the risks mentioned above associated with carrying RFID technology, a recent article by Slyck News “Student Monitoring by Schools, is it Really Necessary or Far Too Controlling?” addresses the glaring privacy issues that surveilling the next generation raises.

With companies gearing up for the Internet of Things another company DecaWave also are preparing themselves with ultra wideband (UWB) RFID chips to monitor humans, stating that “children and infirm adults will be monitored for their safety and security“.  Their website goes on to say:  “And in the future, DecaWave’s chip will be incorporated into cell phones, tablets, and other mobile devices not yet thought of, to interact with our surroundings in ways not yet imagined.”

Many will embrace this ubiquitous living as convenient but as our privacy quickly becomes eroded so does the erosion of any form of freedom to protest against corrupt systems.  Do we have a right to refuse to use or would our anomalous behaviour flag us up non compliant citizens? 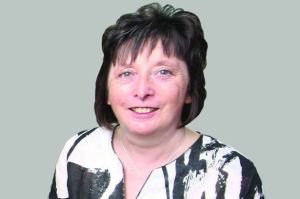 Sara Mogel OBE – was Principal at the first UK school, West Cheshire College, to use active RFID tags to track students on campus

Sara Mogel, ex principal of West Cheshire College.  The woman who thought it was a good idea to spend over £1million of taxpayers money on RFID tags to hang round students neck to track them in real time, gets an OBE for ‘for services to vocational education‘.

I think it is fair to say her contribution to UK education and the RFID industry is certainly unique, though whether it deserves an OBE is debatable.  She is responsible for the decision to hang microwave radio frequency devices around children’s necks in a ground breaking trial of ultra wideband RFID, tracking the children on campus every second.  The first instance of a school in the UK using RFID technology to track individual children’s every movements…  that was scrapped in February 2013 just before she left. (I wonder if the college got a £1,000,000 refund for this?)

No reporting in the local press.  No communication with parents.  The college had no idea of the specification of the RFID, worryingly therefore no information on the specific absorption rate (SAR) of the radio frequencies on the human body.  The health effects of radio frequencies (RF) on the human body are seemingly unquantifiable at present but as more research is done on this topic it is becoming more apparent that caution should be taken and prudencey exercised to limit our bodies to RF exposure.  The RFID journal themselves suggest distancing the human body 1 meter from a reader/antenna.

Let us sincerely hope that there will be no ill health effects from the students wearing RFID tags under Sara Mogel OBE’s watch at West Cheshire College and this does not come and bite her back in the future.

Ultra wideband RFID tracking children in the UK – an invasion of privacy?

West Cheshire College and its tagging of students with active RFID was reported in the The Guardian’s article from 19th November 2013 ‘Is UK college’s RFID chip tracking of pupils an invasion of privacy?‘ 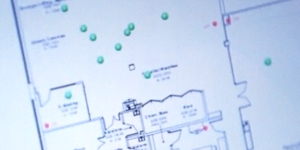 RFID tracking pupils at West Cheshire College taken from the video made of the system by the supplier, Zebra Technologies

Parents of the students tagged with RFID at West Cheshire College had no knowledge their children were being tracked every second by an active RFID chip.  The college can provide no literature given to students about this and no privacy impact assessment was done.  The college can only “assume that information about RFID was also communicated verbally to students” during induction in which “the induction process is covered verbally with students”.

An adult pops a RFID tag round a child’s neck and assumes that this second by second tracking was communicated effectively, verbally during an induction?  The fact that not one student or parent objected to this rings warning bells.

Did no intelligent thinking adult at the college think that possibly, just quite possibly, that verbally informing students about electronically tagging them may bring up issues of consent from a minor and that perhaps this level of communication may leave the college vulnerable to criticism and, at the very worst, possible litigation.  And did no one there consider that electronically RFID tagging another human and viewing their location in real time is compromising their privacy, maybe even just a tiddy-widdy bit?

Apart from the invasive intrusion of an adult peering into where children are –  who they hang out with, when they are visiting the toilet, shower, school nurse – no privacy checks or advice from Department for Education, Information Commissioner’s Office (ICO), Children’s Commissioner or any legal body (see question 1 and 2) was undertaken by the college.

Bearing in mind that lying under the Freedom of Information Act is an offence and that “A person guilty of an offence under this section is liable on summary conviction to a fine“, we must take these answers from the college as gospel.

The Guardian article failed to mention cost which came in at £1,050,242 (ex VAT).  Over a million pounds of public money spent on a RFID human tracking system that there is no information about and that the college has now scrapped due to the “software would not communicate effectively to the current register system” and “escalating costs“.  A million pound spent on a RFID system the college cannot not even recall when implemented?

What an amazing, jawdropping sequence of events.  This could almost be made into the perfect example of a ‘what not to do when RFID tagging children in education’ handbook.  A truely epic fail.

So back to the question ‘Is UK college’s RFID chip tracking of pupils an invasion of privacy?‘ – most probably.  Here is the video of the system on Youtube – you decide.